A VISIT TO THE ELLIOTT'S
June 2nd to 4th 2011
Marg, Stacey, Campbell Stahlbaum and Ngaire Vellich

We were driven from Manzini, Swaziland to Durban, South Africa by a driver hired from a Nazarene church.  The trip was almost 7 hours and along the way we traveled through several game reserves.  We saw some warthogs, baboons and a couple of zebras on this journey.  We finally arrived at the Elliotts' home and were met by Shireen.  What a gracious hostess.  She even invited our driver to stay the night in their home so he didn't have to travel back to Swaziland in the dark.  However, he had made other arrangements but was very grateful for the offer.

Their home is on a busy road and it is gated as are all the other homes in Durban.  Shireen said that if you don't have a gated property, anyone who stays on your property longer than 48 hours is entitled to stay as long as they want and you can't evict them.  On their property they have a guest house that sleeps approximately 8 people and it has two bathrooms and fully equipped kitchen.  Shireen was very thoughtful and stocked our fridge with some beverages and milk and also had purchased some things to make for snacks at night.  We arrived there around 4:30 in the afternoon and were ready for a nap!  Shireen ushered us into the guest house and said that she would be ready for supper around 6:30.  So, we tried to nap but just couldn't.  Campbell and I were sitting on the couch and he saw Collin in the yard overseeing some plumbing that was being done on the property.  Campbell said, "That man looks familiar.  Do we know him?" and I replied, "Sort of.  He's on our fridge."  A few minutes later, Collin came to our door to introduce himself to us.

We chatted for a bit about our trip to Swaziland and then I told him about Campbell's comment on how he looked familiar and my answer.  I thought I was being encouraging by mentioning how we had them on our fridge.  Well... the jokes that came out of him were hilarious after that.  The Elliotts are now affectionately known as our fridge family.  That evening they took us downtown Durban, to the sea.  We watched groups of people trolling for fish and dragging in their nets to shore.  Collin shared many stories of his life and we learned a lot about him.  It is obvious that his life has shaped him and the compassion of His Savoiur that pours out of him for those in his community.

The next day, Shireen took us to the church where she pastors.  We were introduced to the associate pastor as well who lives in the parsonage on the church's property.  It was then that the Elliotts explained that they wanted to mentor this young man to take over the church some day when God releases Shireen from her duties there.  Also, they explained that they gave him the parsonage and they purchased their current property with the guest house so that Collin could house pastors from all over the region there at no charge.  This guest house would make the travel for these pastors much more affordable since they wouldn't have to pay for housing or meals.  Their own home was comfortable but set up to seat many guests around the table.  Shireen took us around the community neighbouring their church.  It had a strong muslim and hindu population with many religious symbols around those properties.  Shireen and Collin also host a church in the open air in an area that does not have any community centre, stores or businesses.  This neighbourhood is made up of single room homes of people that have made shelter there for their families.  This is the dream the Elliotts have - to build a multi-purpose building for the youth and the church.  They told us they had met with government leaders and they are willing to give them land to build!

We spent the last day with them at breakfast sharing our dreams and the things we felt that the Lord was leading us to.  The Elliotts are praying that someone will come along side of them to build this building.  They have the people to help build and put in the necessities, they just need some help in getting the funds.  We prayed with them and then they asked us to share our dreams.  They are truly interested in each person as a person.  One thing that Collin said that woke me up from my ignorant ways was this:  The first morning we shared breakfast, Collin brought out a card from the Hamilton Mountain Church.  He said how encouraged he and Shireen were each time that faithful church sent a card.  In my ignorance I said, that it was a small church on our District just like mine (Cambridge Preston).  Collin said, "A small church?  How can that be?  When a church remembers its misssionaries and sends cards faithfully they are a big church.  They are praying for us and the ministry we do.  They are a big church involved in the big ways that our big God is moving."   Collin and Shireen have every card that our District sends them.  They keep them out on display for those days when they are discouraged, because those cards are a reminder to them of God's faithful provision and obedience.

The Elliotts made us feel a part of their family and we never felt uncomfortable or like a stranger.  As they took us to the airport that final day to fly into Johannesburg, we laughed over some of our time together and prayed with each other.  I will be sharing some pictures of Durban and their dreams when we share at the BBQ and  Missions Night at Family Camp, Saturday July 23rd (Riverview Camp).

Thanks for giving us the opportunity to see missions upfront and personal in Durban. 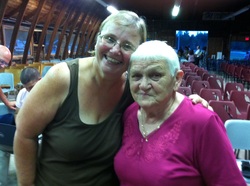 On Saturday evening, July 23rd, Marg, Stacey and Campbell Stahlbaum shared the story of their visit with the Elliott's in Durban, South Africa.  The story included the blessing that Collin and Shireen expressed for the cards received from our Hamilton Mountain church (see above).

Liz Brokmann, Hamilton Mountain's faithful L.I.N.K.S. representative, was at Family Camp and at the mission service to hear Marg's story.  Here she is with Marg.  What a blessing Liz received, hearing what a blessing she is to Shireen and Collin (and to each of the others with whom she regularly corresponds).
© Copyright Gord Evans 1996–2023 - All Rights Reserved