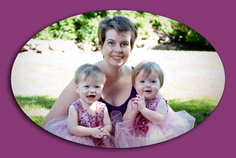 Greetings from the east coast. This note comes to you as an expression of gratitude and an update report.

Our daughter Heidi was here for several days in the last couple of weeks while her husband was out of town. She and the twins flew down from Hamilton and it was our privilege to host them.  Eleven months ago, we were on the verge of losing our only daughter so her presence at “home” was really special.

I know you will recall that immediately following the birth of Heidi’s twin girls, she went through three surgical procedures and we came within in minutes of losing her. We have recently learned that the hospital, where she was, actually ran out of blood and sent ambulances to others in the area to supplement their supply.  It was shortly after this traumatic time that I sent out an urgent prayer request on Heidi’s behalf.  Her heart was so damaged that she was going to be sent to UWO as a candidate for a heart transplant.  Nazarenes across Canada mobilized to petition our Heavenly Father on her behalf.  God moved in a miraculous way and overnight her heart showed a 300% improvement and the transplant option was removed from consideration.

Following her discharge, Heidi was given some medication to regulate her blood pressure and that is about to be terminated since she is doing so well. On a recent visit to the cardiologist she asked what report she could give to her parents.  He told her to tell us that she is doing “great”.  What is significantly great for us is, that was spoken by the same cardiologist that suggested the heart transplant!

I hope this current photograph (click on the photo to enlarge) verifies the good health and happiness of all three of these amazing young women.  When Heidi and I were walking around at the Sussex Balloon Fiesta, we ran into a nurse/volunteer from the Sussex Christian School who had prayed for Heidi but had never met her.  When she made the connection, she said: “Oh, you’re the miracle mom”.  That pretty much summarizes it for us too.  I want to thank you again for the very significant part you all played in this miracle and to remind you that our God still answers prayer.

Dave and Pat Taylor
P.S.  Abigail and Emily will be one year old on 7 October.

​Saturday, October 17th, 2015 -
​This is an urgent prayer request for Canada Central to pray for former missionaries, Pat and David Taylor's daughter, Heidi. Heidi recently gave birth to twin daughters but her health has deteriorated and she is in ICU. Her heart is not doing well and they may have to move her to London for a possible heart transplant. She is unable to care for the babies who are still in the hospital. Dave and Pat are staying with Curt and Dale Harrison from our Brantford Church and they  are spending every day all day with Heidi at the hospital. They need all the prayer they can get for Heidi, the babies, her husband, and Pat and Dave.
​A WONDERFUL update on Heidi's condition.
The following is an excerpt from Dr. & Pat Taylor:
Yesterday we sent to you a very urgent request to pray for our very sick daughter, Heidi Bird, in the ICU at St. Joseph's Hospital in Hamilton. Prior to that letter Heidi had two electrocardiograms and the second one was even worse than the first, with both of them being very critical. The cardiologist used the phrase "heart failure" in describing Heidi's condition. Because of the severity of the damage done, the option that was presented to us yesterday was the possibility of a heart transplant. And then YOU prayed!!!!
A few minutes ago Heidi called us from the ICU. The medical staff had just done another electrocardiogram and the improvement in her heart function was so great they have removed the possibility of a heart transplant from discussion. One of the heart medications that was sustaining her heart function has been removed and she has had extreme improvement in her breathing and mobility.
This note really is not to just bring you up to date but to express to you our sincerest thanks for representing our daughter at the throne of grace. We will be forever in your debt for what you have done for us and Heidi. Because she still has some significant healing to do throughout her body, with a chuckle Heidi said, "Please don't tell them to stop praying."
We have no doubt at all that this marked improvement is the result of the Lord's favourable response to your prayers. He is faithful and we are certain that we are in the midst of experiencing a miracle!!! We thank the Lord for His touch on our daughter's body and we thank you for your many, many prayers.
Sincerely,
David & Pat Taylor
The Rest of the Story ...
Heidi had the other sonogram Thursday.  Shortly after, one of the resident physicians came to Heidi’s room ... he said Heidi’s heart has improved so much that from a cardiologist’s point of view there is no further need to keep her in the hospital.

Now Heidi’s strength needs to be restored, and the twins need to gain a little more weight.  Their nasal feeding tubes have been removed and they are both a little over 5 lbs.

Heidi has been in the hospital since the birth of Abigail and Emily on October 7th.  Following their birth she came within minutes of bleeding to death, underwent several surgical procedures, received 16 units of blood, and was considered a candidate for a heart transplant because of the trauma to her heart due to the extreme blood loss.

There is one other event we would like to share with you from this crisis.  The medical folks have no explanation for it and two physicians have told us the sharing of the account by Heidi gives them goose bumps:

Heidi was lying on the operating table losing blood almost as fast as the surgical attendants could replace it and she remembered that her grandfather Taylor bled to death on an operating table five years ago.  When the anesthesiologist placed the mask on her face she was gripped with absolute terror and pleaded with him to make sure he brought her back.

At this point she looked to the side of the operating table and her grandmother Taylor was sitting there on a chair.  She reached out and Heidi could feel her holding her hand and she said, “Heidi, you are going to be all right.”  Then the anesthetic took effect and Heidi went unconscious.  What makes this account so remarkable is that her grandmother has been in Heaven since 1995.

In a few days we are anticipating that Heidi will be discharged from the hospital.  Pat will stay in Hamilton for some time to help Heidi with the twins and Dave will return to Sussex.  One of the questions that has been raised several times by Heidi is “How do I thank all these people who have prayed for me?”  We have not found an answer for that question but please be assured that our hearts are full of gratitude to you for your intercessory prayers and to God for the great things He has done.