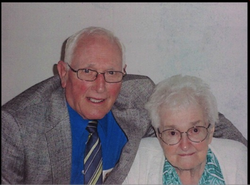 My father grew up in South Dakota. I think his missionary career started with a schoolteacher who, every single week of the year, would send a postcard to Dad and his family, inviting them to church. Dad's family was not interested in church at all. My grandfather finally said they should go so this lady wouldn't spend all of her money sending postcards to them. So everyone went to church, and Dad was introduced to the church and missions. I think the dogged sense of evangelism he carried through his whole life might have been affected by this teacher's persistence. I have a picture of my dad out in the sagebrush on his knees with his Bible. That's where he would go to pray.

He didn't want to just be okay with God, but to be completely sold out to God. He didn't want anything-no matter what-to prevent God from becoming everything in his life. Dad didn't feel a call to missions at that point, but he wanted to be completely surrendered to whatever God had planned for him. He went to the altar and out in the sagebrush and prayed until he had nothing else left to give God. The most important thing for him was heart holiness. My father kept saying, "I do not want just part of what God has. I want everything."

This sealed his commitment and he never turned back. Dad gained a confidence in God. When we live at that level of the Spirit, the decisions, plans, dreams, and big thoughts God gives us are all part of God's plan because we are already sold out to Him. That's the stage where Dad was "no doubts" it was full throttle ahead. That's how I saw Dad live.
- Kathy Mosteller Loeber is the oldest daughter of Earl and Gladys Mosteller 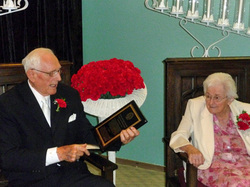 Earl and Gladys Mosteller celebrated their 70th wedding anniversary in June, 2011. The couple married June 12, 1941, before going into missionary service for the Church of the Nazarene.

Their daughters and sons-in-law - Kathy and Larry Loeber, Virginia and Jim York, and Liz and Steve Ott - organized a reception for them July 9 at the Seattle Aurora Church of the Nazarene in Shoreline, Washington.

On the long eastern wall of the reception room were five flags representing the countries where the Mostellers spent their 70 years of marriage ministering for God: the United States, the Cape Verde Islands, Brazil, Portugal, and the Azores Islands. At the far end of the room, on the north wall, were two throne chairs backed by a sea of red carnations and an array of candles. There, the couple enjoyed three hours of personal congratulations and honors.

Pastor Jose Delgado, who was baptized as a young teen by Earl Mosteller in the Cape Verde Islands and later pastored with the Mostellers in Portugal and evangelized with them in the Azores, surprised the couple with a four-day visit and attendance at the reception. Delgado now pastors in Rhode Island.

Relatives, many of whom the Mostellers had not seen in decades, also attended the event. Friends in Ireland and Portugal sent floral arrangements with their congratulations. Literally hundreds of friends sent congratulatory cards and emails with the fondest of thoughts for the occasion. Still others telephoned.

L. Aguiar Valvassoura, head of the Church of the Nazarene in Brazil as well as pastor of the church founded by the Mostellers in Campinas, Sao Paulo, Brazil (which under Valvassoura's leadership is now one of the two largest in the denomination), sent a unique gift of a 10-inch slice of amethyst stone with a message and a photo of the newlyweds inscribed on a metal sheet attached to it. The inscription read: "Seven decades of connubial vision in the presence of the Lord— what an extraordinary legacy! We celebrate with intense joy and manifest our gratitude for their dedication lavished on the Church of the Nazarene in Brazilian lands - L. Aguiar Valvassoura, Church of the Nazarene of Brazil."

Their alma mater, Northwest Nazarene University, honored the couple with a beautiful engraved plaque, which was accompanied by a letter from NNU President David Alexander and presented at the reception by Shawn Blenker, development officer for Planned Giving. A scholarship grant, "The Earl & Gladys Mosteller Called unto Holiness Grant", has been established at NNU in the couple’s honor. The Mostellers consider themselves unworthy of such an honor and thank their great friends Paul and Lori Freeberg for their generous endowment in initiating the grant.
© Copyright Gord Evans 1996–2023 - All Rights Reserved